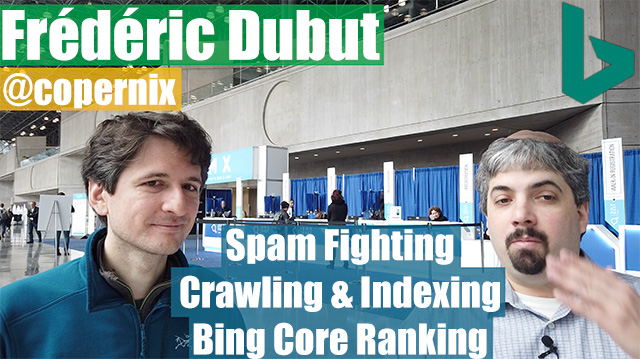 I sat with Frederic Dubut (CoperniX), the Lead PM of Bing’s Core Ranking Team, who has been at Microsoft for about 12 years now. It was a pretty amazing year for him; he became a US citizen, got married and got the promotion to the core ranking team. This video took place at SMX East at the Javits center last week.

We then talked about his earlier career, from his days in the French army and even working on an assembly line at Nissan making cars in Japan. He told us how he joined Microsoft as an Intern, worked on Office and then eventually moved to Seattle to join the Microsoft Bing team.

His first job on the Bing team was to work on crawling and getting content in the index. Then after that he moved to the spam team to help lead things up with spam. We spoke about the differences of working on crawling versus spam. We then discussed about some of the new Bing penalties, including subdomain leasing. We spoke for a while about spam, because that was what he was focused on for so many years until just recently. In fact, I asked how seeing the worst part of the web ways down on him emotionally.

As we talked, he explained how small improvements can be huge wins. It is a tough balancing act improving relevancy and it is a game of “inches” he said.

His new job means he has two main things to work on including mentoring younger PMs on the Bing team. The other part is that PMs look at things from the customers perspective. So it isn’t just technical, but thinking what the searchers want – how to satisfy them, the searcher.

I asked him about how much personalization Bing does in search. He said there isn’t much personalization done, outside of location specific stuff. In rare cases, Bing may show you web sites you really like but that is something Bing is backing off on that because the cost of doing this doesn’t have that much value add. We talk about other personalization, like previous query, using Facebook likes and other things don’t seem to be part of Bing’s algorithm.

Crawling the web is how search engines have generally worked in getting content into its index. But Bing is pushing asking sites to push these URLs and potentially the rendered HTML to the search engine is something Bing really wants. A push vs pull scenario and Bing is all in on this. Bing is prepared to deal with any spam related issues with this method.

The SEO community is a very special place and Frederic said he enjoys the community and it gives him a different point of view. It is important for Bing to be part of the SEO community because SEOs are the ones helping bring the best content for Bing’s index. We then mentioned a few names of those who are in outreach for Bing.

Here is the video:


You can subscribe to our YouTube channel by clicking here so you don’t miss the next vlog where I interviews. I do have a nice lineup of interviews scheduled with SEOs and SEMS, many of which you don’t want to miss – and I promise to continue to make these vlogs better over time. If you want to be interviewed, please fill out this form with your details.

Some of the most influential companies of our time have changed the way people search for information, stay connected and communicate across the world. And to recruit talent to work on their ambitions to change […]

âGoogle it.â We use this phrase every day. Once upon a time, the word âGoogleâ just indicated a very long number. Today, itâs a verb. That extends to physical products as well, like these 20 […]