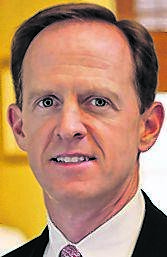 WILKES-BARRE — Auditor General Eugene DePasquale last week hosted PennPIRG for the release of its 34th annual Trouble in Toyland report on toys that could be hazardous to children, and again called for efforts to get recalled toys quickly removed from store shelves.

“With the holiday shopping season underway, I urge toy shoppers across Pennsylvania to look beyond the colorful packaging and carefully consider whether the toy inside is safe and age appropriate,” DePasquale said. “Federal authorities reported more than 251,000 toy-related injuries treated by hospitals in 2017.”

The U.S. PIRG Education fund has identified three categories of toys that consumers should be on the lookout for:

The tested toys showcase only a small portion of the thousands of toys available for sale in stores and online. Over the past three decades, the group’s testing has led to more than 150 toy recalls and other regulatory actions.

“Toys have become safer over the last three decades, but dangerous and toxic toys are still on store shelves,” said Emma Horst-Martz of the PennPIRG Education Fund. “With that in mind, parents need to be vigilant to keep their kids healthy and safe. Manufacturers and regulators must do more to ensure all toys are safe before they end up in a child’s hands.”

Toy safety standards are enforced by the Consumer Product Safety Commission, which announced 12 recalls of toys and children’s products this year. Because manufacturers are not required to inform the public how many recalled toys were returned or repaired, it is impossible to know how many of them might still be in homes.

DePasquale encouraged parents and other caregivers to check to see if any toys they already own have been subject to a safety recall. He noted that whenever a toy or children’s product is recalled, state law should require that these items be quickly removed from sale.

“While serving in the state House, I introduced legislation to require dangerous toys to be immediately taken off of store shelves. This topic will always be important and I’m again calling on the General Assembly to act on common-sense legislation to protect our vulnerable children,” he added.

PennPIRG is the Pennsylvania affiliate of U.S. PIRG, a federation of independent, state-based, citizen-funded organizations that advocate for the public interest. To review the 2019 report, visit www.ToySafetyTips.org.

Visit the Department of the Auditor General online at www.paauditor.gov.

Legislation sponsored by Rep. Tarah Toohil, R-Butler Township, that would ensure no agreement can prohibit survivors of child sexual abuse from speaking with law enforcement officials last week was sent to Gov. Tom Wolf for enactment after it passed unanimously on concurrence in the House of Representatives.

“My legislation makes it very clear that sexual abuse survivors in Pennsylvania will now be able to provide information to criminal investigators regarding the heinous crimes allegedly committed against them, even if they signed a confidentiality agreement years earlier,” Toohil said. “This long-overdue change in the law is a victory for survivors.”

House Bill 1171 is derived from one of the recommendations of last year’s 40th Statewide Investigating Grand Jury, which focused on clergy sex abuse in Pennsylvania. The grand jury found that Roman Catholic dioceses used confidentiality agreements to silence abuse victims from speaking publicly or cooperating with law enforcement.

Toohil dedicated her bill to Audrey, a woman from northeastern Pennsylvania who was the victim of sexual abuse.

“Audrey was the poster child of the grand jury report. A priest molested her for five years, impregnated her and paid for her abortion,” Toohil added. “Today is a victory for Audrey and other survivors like her.”

House Bill 1171 is one of several pieces of legislation passed by the House to provide better protections for childhood sexual abuse survivors in Pennsylvania. They include House Bill 962, which would allow childhood victims to file suit until they reach age 55; House Bill 963, which would provide a two-year window to submit claims in civil court if the statute of limitations has already expired for that victim; and House Bill 1051, which would apply a higher penalty of third-degree felony for an ongoing failure to report continuing sexual abuse.

Toohil said Gov. Wolf has indicated he will sign the bills into law.

Legislation sponsored by Sen. Mario Scavello, R-Mount Pocono, that would increase the legal age for purchasing tobacco products from age 18 to 21 received final Senate approval last week and is set to be signed into law.

Senate Bill 473 would make it a summary offense for anyone under 21 to purchase any tobacco product, including cigarettes, e-cigarettes, smokeless tobacco, cigars and pipe tobacco. If it becomes law, Pennsylvania will join 21 states that have a tobacco and e-cigarette sales age of 21.

In Pennsylvania, cigarette smoking causes 22,000 deaths each year. Annual health care costs of $6.38 billion are directly caused by smoking, along with another $5.73 billion in lost productivity, Scavello said.

“As the availability and appeal of e-cigarettes has increased in particular, the rates of high-school age children vaping has increased 40 percent in just one year. Twenty-four percent of Pennsylvania high school teens use e-cigarettes, driving up overall youth smoking rates to over 32 percent,” Scavello said. “It’s clear that we have to act.”

Nearly 90 percent of smokers try their first cigarette before age 18, Scavello noted. An increasing number of teens under 18 get tobacco products from their 18-year-old high school peers — who can legally purchase tobacco products. Increasing the minimum legal sales age to 21 would reduce underage access to tobacco through these legal-age peers.

Recent studies have found that “Tobacco-21” laws have been successful in reducing the amount of people aged 18-20 who smoke and could save more than 223,000 lives from deaths related to smoking. More than two-thirds of Pennsylvanians surveyed favor raising the legal age for tobacco sales to 21.

“This change will save lives and reduce health care costs,” Scavello said. “I speak as the son of a life-long smoker who lost his father to lung cancer, so this legislation hits particularly close to home.”

U. S. Senators Pat Toomey, R-Lehigh Valley; Chris Murphy. D-Conn.; and Joe Manchin, D-W.Va., last week authored an op-ed in the USA Today on the latest state of play in their effort to pass a bipartisan background checks expansion bill.

“We represented an unlikely trio of senators to be at the center of these deliberations. There aren’t many controversial issues upon which the three of us — a conservative Republican, a progressive Democrat and a conservative Democrat — could find agreement,” the senators wrote.

The senators added: “For the time being, negotiations with the White House on background checks have come to a halt. But we think it’s important to note how far this debate moved over the summer and fall, and how close we were to a bipartisan agreement.”

“Every single day, people who are legally prohibited from buying a weapon, including because of felony convictions or violent mental illness, are able to get their hands on a gun due to this unchecked commercial firearms market. While all three of us have different ideas for how far background checks should be expanded, we all agree that the priority must be on making sure that commercial sales include an instant background check.”

“This change in law is supported by more than 90% of Americans, including 85% of gun owners and even an overwhelming majority of National Rifle Association members. In Pennsylvania, West Virginia, Connecticut and the rest of America, background checks are not controversial.”

“For the time being, negotiations with the White House on background checks have come to a halt. But we think it’s important to note how far this debate moved over the summer and fall, and how close we were to a bipartisan agreement.”

I traveled to Europe earlier this year, and used Google maps to get around in a rented car. Google Translate helped me ask basic questions in the local language, while Google’s search engine helped me […]

After surgery, Michael Cohen’s prison date postponed to May…